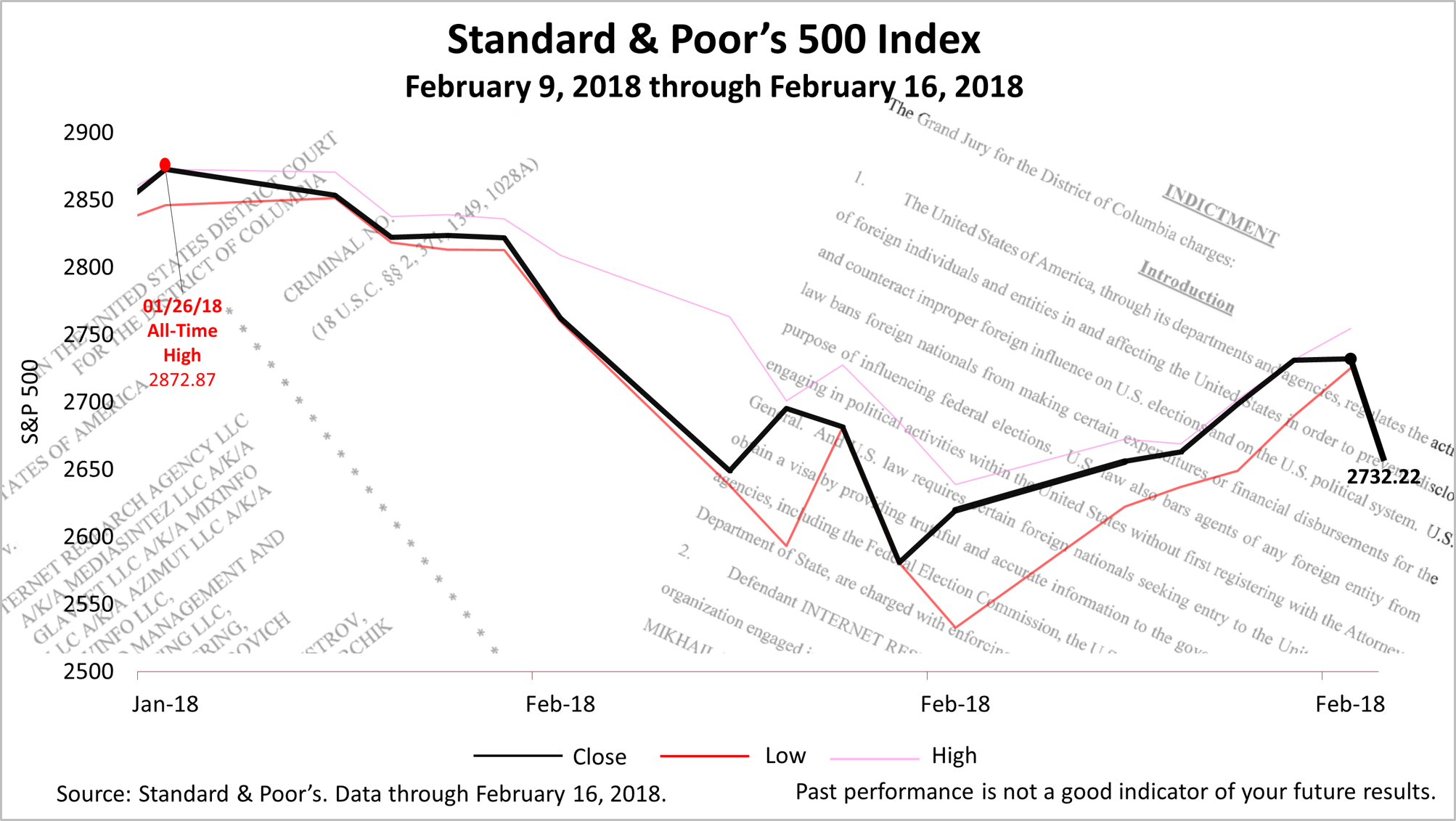 After a 37-page indictment alleging a criminal conspiracy directed by the Russian government to meddle in the 2016 U.S. presidential election was posted at about 1 p.m. E.S.T. on Friday by the U.S. Justice Department, faith in the nation, as measured by the stock market, remained unshaken. Stock prices barely budged on the news.

Investors faced a week of terrible news. The tragic shooting at a high school in Parkland, Florida overshadowed a drop of 11.8% in stock prices a week earlier. Then came the detailed indictment revealing details of a Russian plot to undermine confidence in the U.S. political system.


The good news is that the stock market's performance on Friday indicated confidence of investors that justice ultimately will be done. Share prices of America's largest companies stayed stable because investors wisely focused on the long-term strength of U.S. economic fundamentals.

Here's some insight into current economic conditions and the kind of ongoing analysis required to manage wealth prudently for the long-term through good and bad times. 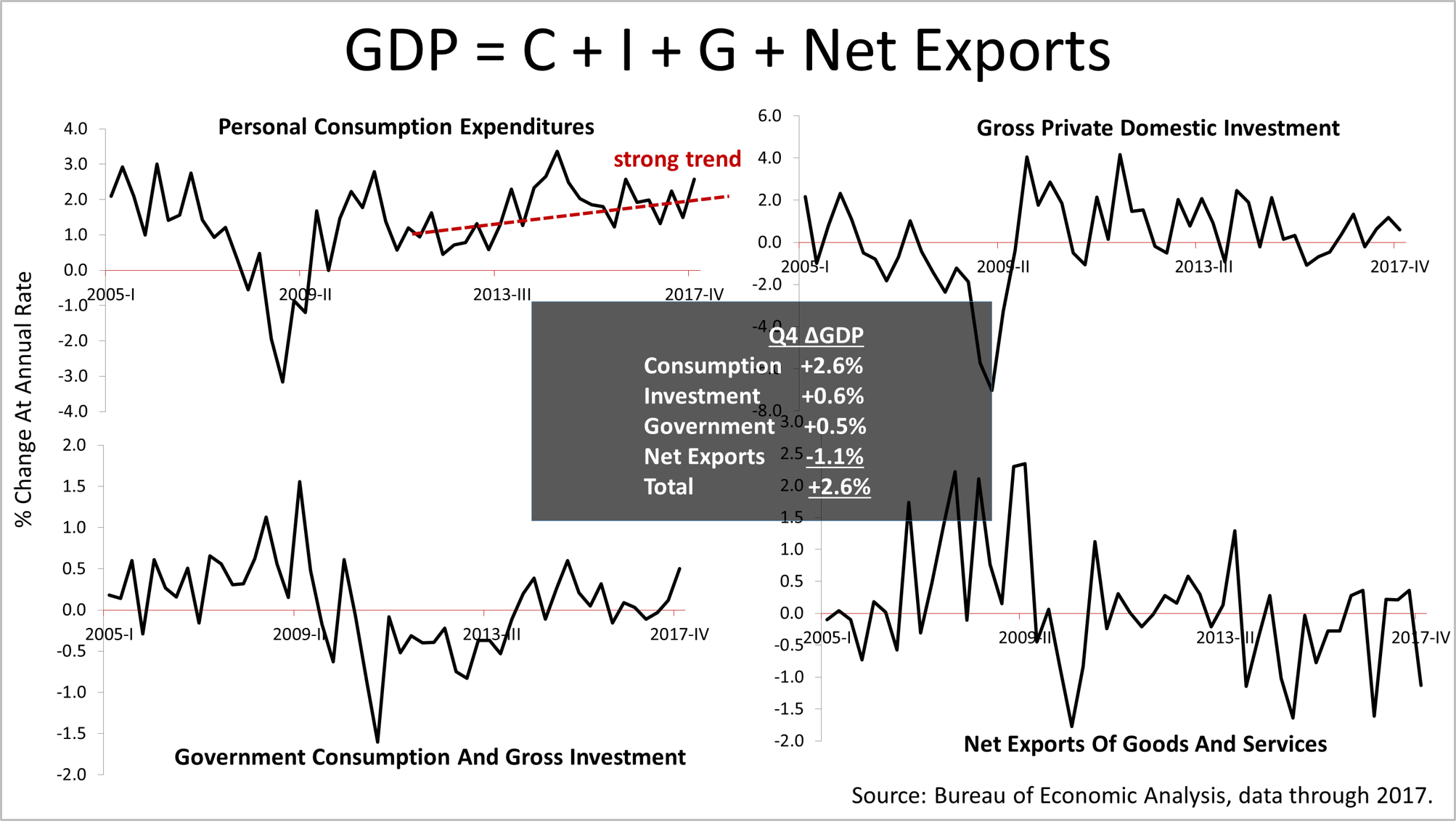 The economy is measured quarterly in terms of gross domestic product (GDP), which is the sum of four factors: consumption, investment, government and net exports. Consumer spending is by far the most important, accounting for 69% of U.S. economic activity. The key to strong economic growth, then, is a strong American consumer. 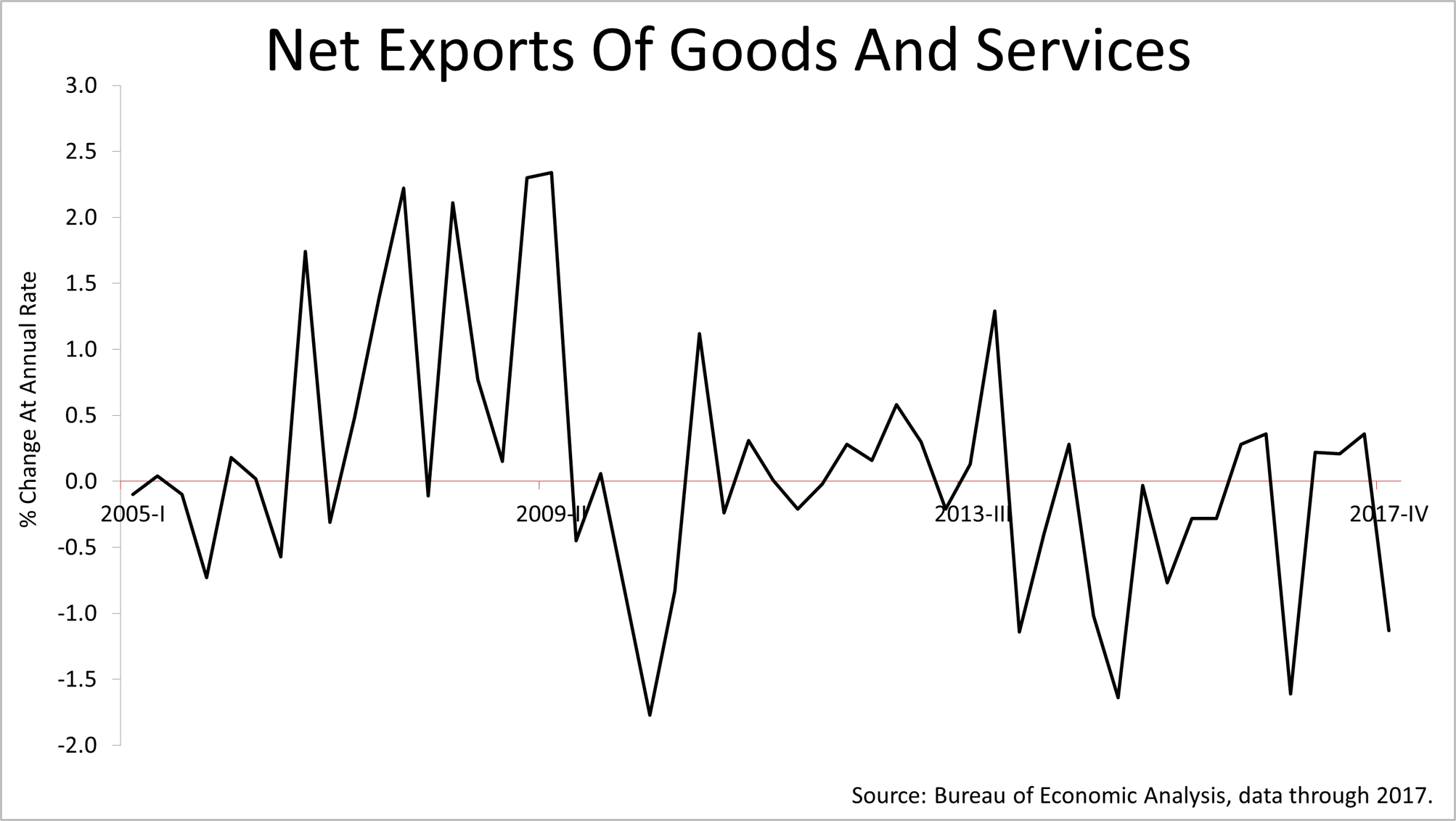 In the final quarter of 2017, net exports were a drag on GDP growth. However, net exports are volatile month-to-month and its dips have been followed repeatedly by surges over the past two cycles of the economic expansion and recession that occurred since January 2002. 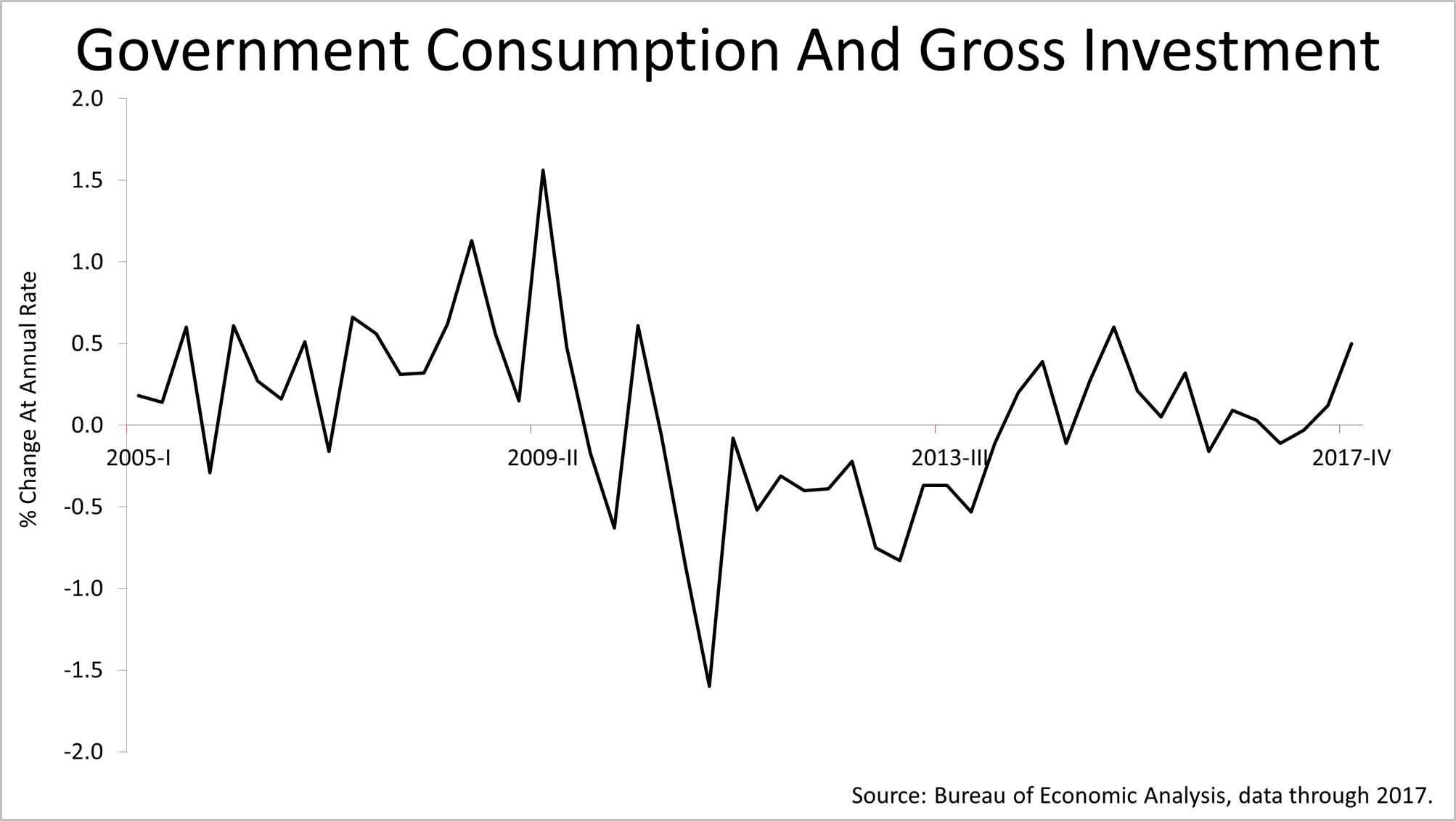 Government spending, which includes state and municipal expenditures, has been on the rebound after suffering years of cutbacks in The Great Recession and its aftermath. With real incomes rising since the financial crisis, tax receipts have risen and state and local government spending grew, which has been a positive factor in GDP growth in recent years. 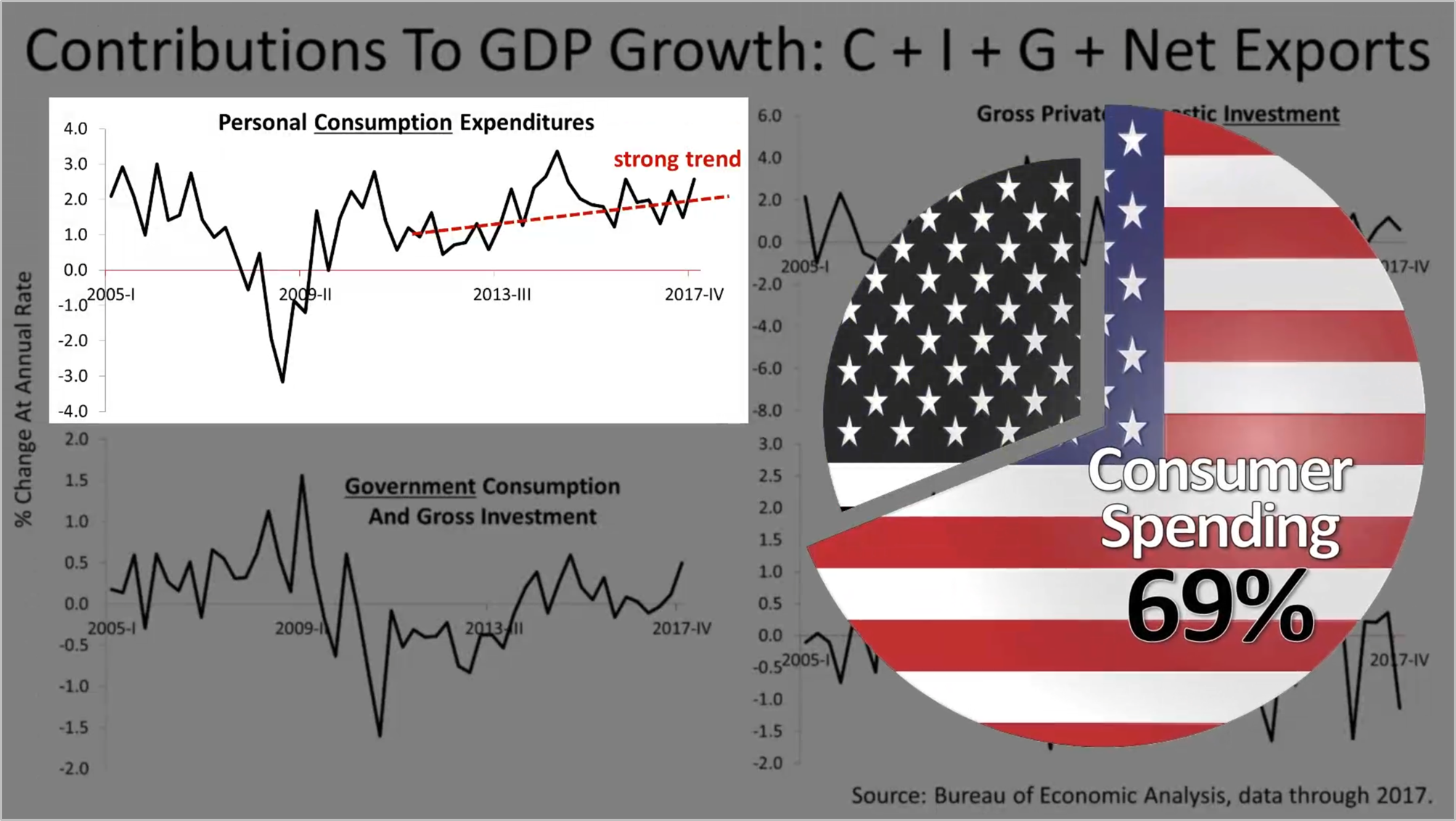 However, government spending and business investment are together not even half as important a factor in growth of the U.S. economy as consumers. If consumers keep spending, the good times for the U.S. could keep on rolling and there is some reason for optimism on that score.


Consumer strength rose in closing out the year, according to the most recent data, extending the strong growth trend line (in red) experienced in recent years. In addition, in February, a lower rate of withholding federal taxes on employee paychecks kicked in, and that is putting more money in consumers' pockets to spend. That could show up in GDP growth figures to be released in early April 2018. 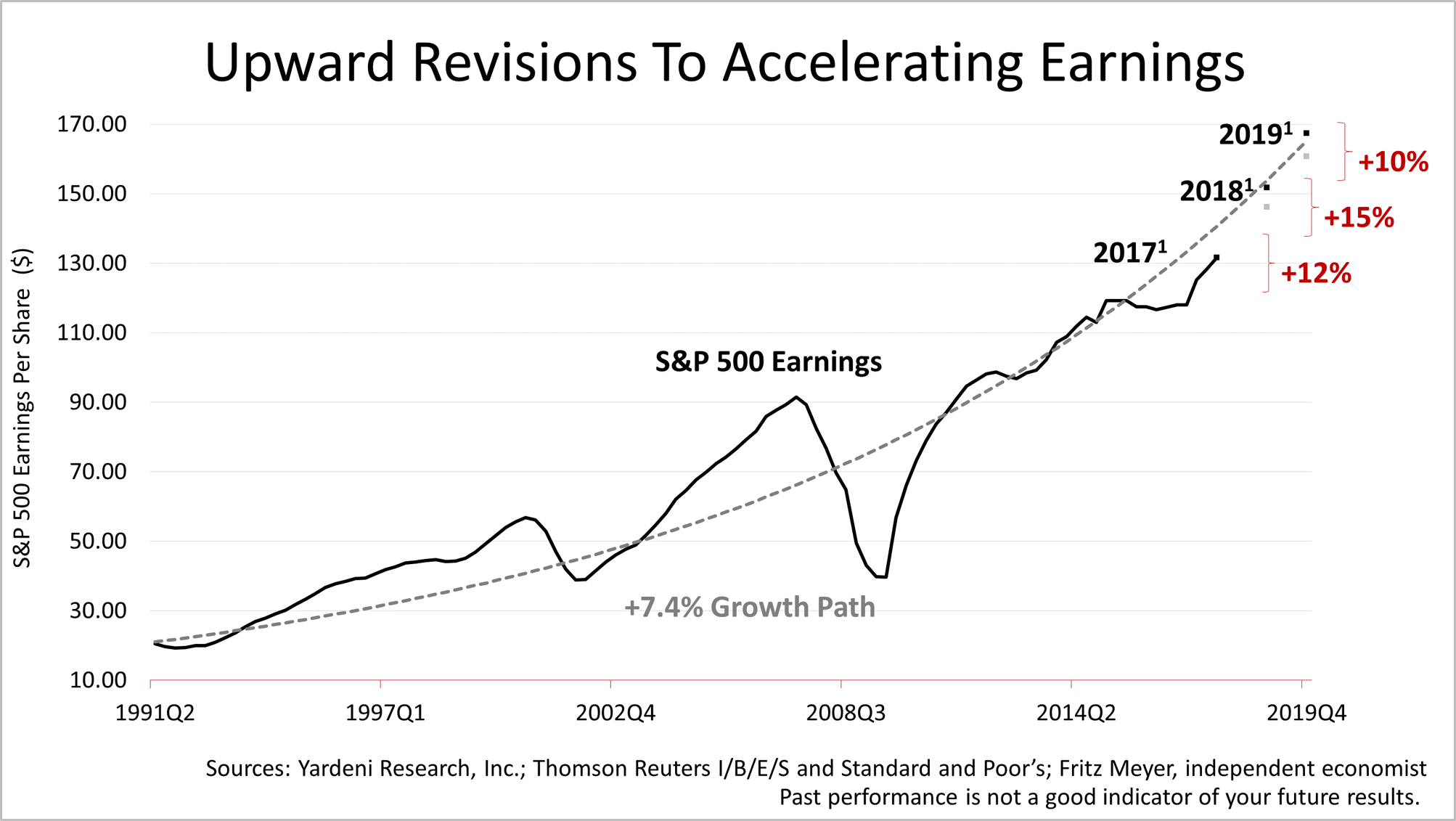 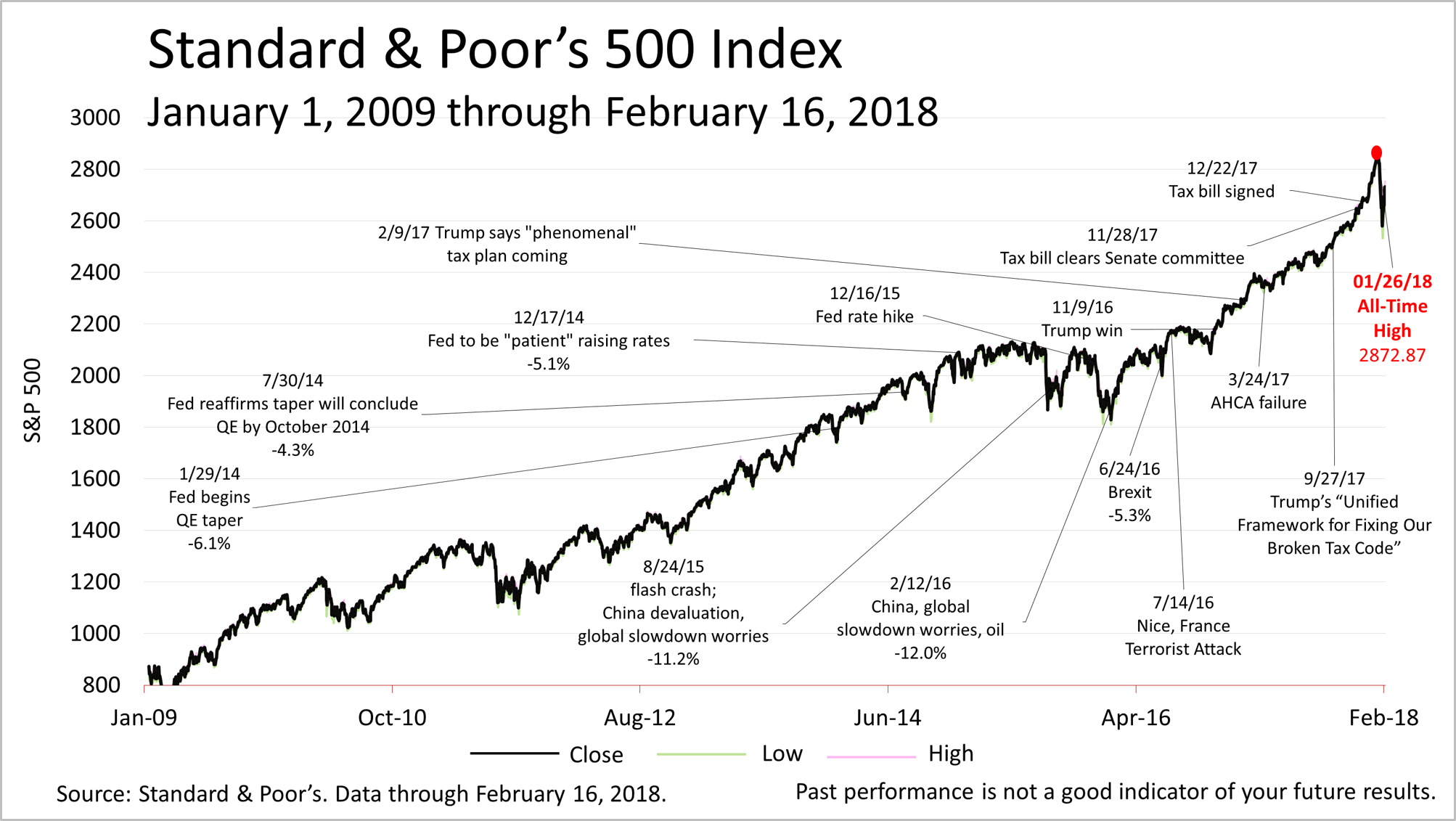 The S&P 500 rebounded by 6% in the last six days and closed Friday at 2732.22. The weekly gain of 4.4% made it the best week for stocks since January 2013, according to the Associated Press, and it came after share prices had plunged as much as 11.8% at the start of February.


Volatility has risen with investors spooked by rising inflation expectations, higher lending rates and growing concerns over the long-term U.S. debt. Statistically, the chance of a bear market decline of 20% or more increases as the eight-and-a-half-year bull market grows older, and the new tax law increases the chance the Federal Reserve will make an interest-rate policy mistake by quashing growth or allowing the economy to overheat and inflation to surge. Fed mistakes caused every recession in post-World War II history.


However, earnings drive stocks and earnings expectations have been surging, bolstered by the new tax law. With real wages continuing to grow, consumers are spending and consumers account for most of the U.S. economic growth. So, despite the correction, the bull market and economic expansion could continue for months and head much higher.

This article was written by a veteran financial journalist based on data compiled and analyzed by independent economist, Fritz Meyer. While these are sources we believe to be reliable, the information is not intended to be used as financial advice without consulting a professional about your personal situation.

Indices are unmanaged and not available for direct investment. Investments with higher return potential carry greater risk for loss. Past performance is not an indicator of your future results.